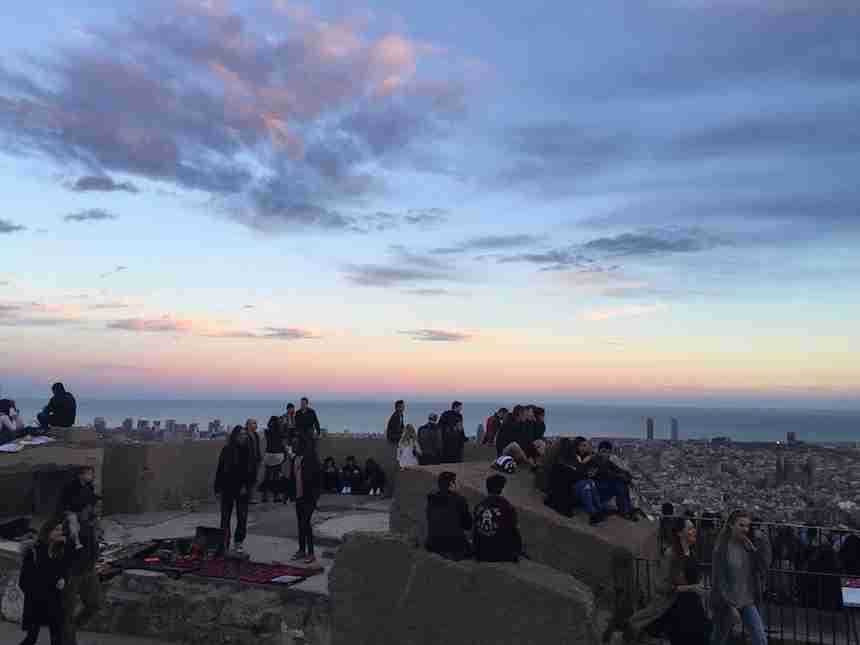 LIZA LEONARD- The best way to see Barcelona (in my humble, have-only-been-there-once opinion) is by looking up, then looking down.

This past weekend, I took the high speed train from Madrid to Barcelona with friends. The city was beautiful, colorful, and full of glorious sunshine. I was only there for two nights, and hardly covered the must-see attractions, but everything I did see made for an unforgettable weekend. The taste of the city I had was tantalizing enough to make me want to go back, maybe in April or May when the weather is warmer and I can go to the beach. But, if like me, you only have a day or a weekend in Barcelona, I recommend looking up and then looking down.

When you are in Barcelona, it is true, you absolutely must see Gaudi’s masterpiece that is the Sagrada Familia. We bought the tickets to see the inside, and it was absolutely worth it. From the outside, the cathedral is tall and majestic and rises up from the otherwise street, commanding attention. The details on the exterior are stunning, ranging from turtles carved into the pillars and colorful hats topping the tall turrets. The cathedral is still under construction, so be prepared to have scaffolding ruin your Instagram (if you are into that).
Though the Sagrada Familia is remarkable from the outside, the inside is breathtaking. The inside is spacious and full of rainbow light streaming in from the color-coded windows. The ceiling seems to stretch up beyond the constraints of the turrets. The white columns appear incomprehensibly tall and stretch up to a ceiling blossoming with flowers and airy natural light. The atmosphere seems unbelievable, magical, and fairy-made. I thought it looked like somewhere Tolkien’s elves would live in Lord of the Rings. We walked around for a while, craning our necks and soaking up the rays of red, orange, green, and blue, all made vibrant by the afternoon sun. Gaudi’s obsession with nature is obvious, as the Cathedral emulates natural shapes like long tree trunks growing up towards the sun in a forest.
Before leaving, my friends and I sat in the center of the cathedral for a while, soaking up the energy and the grandness of it. I recommend putting your phone away after you take a few photos. The sight is really better in person, and it’s too bad that a majority of the visitors wander around with their phones in front of their faces the entire time. I enjoyed being there, imaging Gaudi’s genius and coming to the conclusion that I could not comprehend it. Once outside, in the Barcelona sun, I recommend getting a cone or two from one of the touristy refreshment stands across the street. I don’t know why I recommend it, I just do. Actually, get two. The cones were really small. Probably comparable to a kitty cone in the United States.

Go to “the bunkers” and see the city from up above. The Bunkers del Carmel are situated atop the hill of Turó de la Rovira. They were built in 1938, during the Spanish Civil War, and were placed high up in the hills so that they could provide a view of the entire city. After a steep jaunt up to the bunkers you are rewarded with an incredible vista of the city. You can see the moderately low buildings of the city with the Sagrada Familia rising up distinctively, the coast where the popular beach clubs are located, and the beautiful ocean fanning out in multiple directions.
I liked the bunkers because it was a relaxing way to see the city. Many people were there with their friends, sitting on the walls of the bunkers or on the hill and chatting and drinking beers that they toted along. It’s lazy sightseeing. You get to look out on all of Barcelona without having to wait in line, and you can simply relax and take in the scenery. I also enjoyed how it was not strictly touristy. It is an awesome spot and it was evident that the locals enjoy it too.

Our visit to the bunkers was perfectly timed. After a leisurely hour there, the sun descended down under the horizon, painting the soft blue sky with pinks, purples, and oranges. As darkness settled over the city, we drank in one final view from our perch and headed back down into the beautiful city.