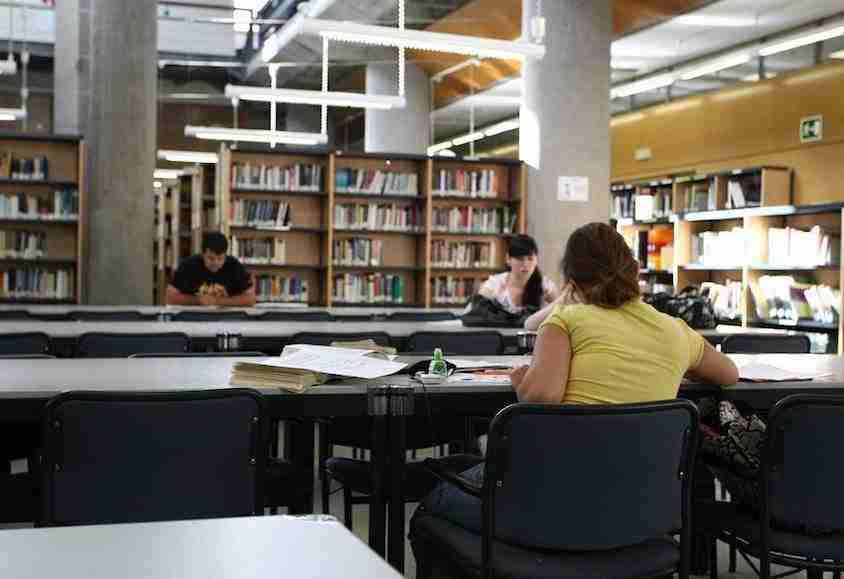 ZOË SULLIVAN-BLUM- There are things about the US that I never thought I would miss. I believe that we pay far too much and are in debt for far too long for our education. Yes, I know that we have excellent universities, but, being the stubborn liberal that I am, I was excited to experience the just-as-good-if-not-better educational opportunities that I believed Spain had to offer. Although not familiar with European Higher Education, I knew enough about schools like Oxford and Cambridge to believe that, in general, it probably bested ours. I came to my first class at the Universidad Autónoma de Madrid (UAM) beyond excited to start my Estudios Postcoloniales (Postcolonial Studies) class. It’s an Anthropology student’s dream to study somewhere else, to learn the way other countries teach the discipline. One of my favorite Anthropology professors at Skidmore is from Portugal, and, in general, my professors have done a good job exposing us to European Anthropological schools of thought (as they do differ from American ones). However, I was still excited to actually take a European Anthropology class, as opposed to just learning about them.

I have had a complicated relationship with my UAM class. First, I would like to make it clear that I am not attempting to pass judgment on an entire country’s system of education, nor am I judging European Anthropology as a whole. I am not even attempting to make broad statements about the Anthropology Department at UAM. The observations I make in this post stem solely from my experience with one class at one university in one city in one country in Western Europe. And these observations are not even solidified, as I am only halfway through the semester. Although the rest of this post may sound judgmental, please know that that is not my intention. I can only speak from the experiences I’ve had, but the fact that I haven’t had more experiences does not mean that I can’t still write some opinions down in a blog post.

With that little disclaimer out of the way, I want to attempt to describe the experience I have had at UAM so far. Many things are wildly different from the Liberal Arts education I am used to in the US. Customs and behaviors I naively assumed to be universal differ greatly at my Spanish University. My class frequently starts 10 minutes late. Students wander in as much as an hour after class begins (the class is 2 hours long). Students talk to each other without bothering to lower their voices while the Professor is lecturing, often texting openly. Although there are 25 people registered for the class, I have never seen more than 15 there at a time (and even that is a generous number). Attendance is not important; the syllabus actually has instructions for extra work for students who do not come to class. The class usually consists of the Professor talking at us for 2 hours, generally without a PowerPoint or even notes written on the board. The students take notes or, more commonly, do other homework while the Professor lectures. There is minimal homework and even less instruction for the homework that we are assigned. The Professor is almost never in his office during Office Hours and rarely answers emails. While we have started to debate a bit more, the critical thinking, discussion driven classroom I am used to has not been my experience here. It is generally up to us to find the readings; the shorter ones are on Moodle—UAM’s version of Blackboard for you other Skiddies reading this—but when I asked my Professor where to find the longer ones his response was, “Wherever you want.” That seems to be the answer to a lot of my Type-A questioning: “However long you want,” “Whatever you want,” “Whenever you want.” The Professor does not say these things to be difficult; rather, there is a much more laidback vibe in terms of guidelines in my class at the UAM than in any class I’ve ever taken at Skidmore.

In some ways this easygoing atmosphere is very nice. I know that GPA is less important. The students here need only pass their classes in order to graduate, get their degree, and move on to finding a job (that being said, Spain’s unemployment rate hovers around 23% for the general population, and at a whopping 46% for Spain’s youth, so finding a job is by no means easy). The attitude towards success in the classroom is much less cutthroat than in my experience in the US. People do not seem to care about their grades nearly as much here, so long as they pass. While there is nothing wrong with this—I often think that American Universities are too competitive—I feel less challenged by my UAM class. Again, this is only one class, so I am not trying to make blanket statements. That being said, the information I have gathered about Spanish Universities, from friends I have made here, the information the Program has given us, and my own research, backs much of what I have seen in my class. Because the Universities here are “free” (they actually do cost some money now, but around $1,000 a year compared with the $30-60,000 range that is typical in the US), the students are not viewed as clients in the same way here. Classes are much more about memorization as opposed to the critical thinking we prize so highly in the American Liberal Arts world.

Because of all this, I find myself missing the intellectual atmosphere of Skidmore. I am hungry for the discussions we have, the intensity of our Professors’ passion, the drive to know more, do more, be more that we all seem to possess. I am grateful for the opportunity to take a class at a Spanish University, and seeing the differences in Spanish Anthropology has been fascinating. I could have dropped my UAM class, but I chose not to because of the people I’ve met and the insight I’ve gained. And, in ways I did not expect, it’s made me appreciate the American Higher Education system. Don’t get me wrong, I still think it’s absurd how much we pay for our education. I don’t think these differences stem from a “free” education. I think they stem instead from a history of less social mobility and a much more group-focused approach. One the one hand, I struggle with the highly individualized mentality in the US. But, on the other hand, I am so grateful for the ways that has influenced the education I have received. Taking a class at the UAM has been enlightening, and I am glad I decided to do it. I think it is important to experience, however slightly, education in a different country. And yet, my class at UAM has also been enlightening in that I appreciate Skidmore and the liberal arts education in ways I didn’t before. We may have a fair amount of problems in America, but we sure can teach.