LIZA LEONARD- When I was younger I always loved looking at catalogs. There was something soothing about flipping through the pages of “junk mail” that somehow always found its way to our kitchen table. I liked the images of stuff, even if it was corporate conference favors from my mom’s persistent “Oriental Trading Company” catalogs. I think I liked to see what was out there, what was available. I eventually graduated to magazines, chapter books, and novels, but there is still something satisfying about filling up on images. Photos that my friends take or that appear on blogs I read color the world as big and varied and full of beautiful and not-so-beautiful nooks and crannies. These images exist somewhere, filed away in my mind. As one of my favorite authors, Haruki Murakami, writes in Kafka on the Shore, “there’s a little room where we store those memories. A room like the stacks in this library”. He is talking about what it means to be alive. He is talking about how we experience things, see images, accumulate more and more, and grow the “libraries” inside our heads.
Since coming to Spain, I have felt my internal library filling up with images and things unexpected but glorious. I am exercising an ability to collect. Traveling, especially, presents opportunities to expand the contents of my brain’s file cabinets. I traveled south last weekend to Andalusia, to the cities of Granada and Seville. Yes, a google image search can show you beautiful images of these places, but it is more impactful to travel to the place and see it in person, to confirm that it exists, that it is dynamic and dimensional and filled with people that call the place home.
Here are some catalog items that are being added to my “library” after my recent travels:

My friend from the Alhambra. In Granada, the most famous attraction is the Moorish fortress, The Alhambra. Unfortunately, I got rejected from seeing the Palace because my ticket was for a later time than all my friends. As everyone else went inside, I sat outside in the sun and talked to another palace-reject from Taiwan. He said he hasn’t been home in four years, because he has been traveling and working in Australia and Europe. He described to me his time in the outback, working as a “cow boy” and earning travel money. Being stranded at the Alhambra allowed us to bond even though we were vastly different, from places as different as Connecticut and Taiwan, and from backgrounds as different as American University and Australian ranching. 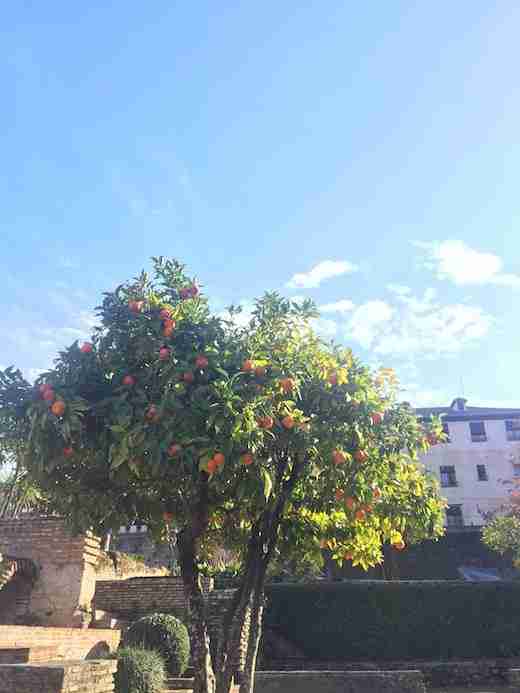 The orange trees in Granada. The streets of Granada are lined with abundant orange trees. They are striking in their contrast—lush and verdant with pockets of bright orange fruit. Some of the fruit hangs low enough to pick, and I plucked one down as soon as we left the bus station even though I was not sure if it was illegal or not. However, I knew as soon as I tasted it that they were safe in the trees from hungry passerby’s. They are extremely sour and unpleasant.

Dreadlocks. I saw more dreadlocks in Granada than I have in any other city I’ve been to, and I have spent summers and New Years in Burlington, Vermont, my entire life. There was a young, bohemian vibe to the city that I did not expect. The crafts and clothes for sale had the feeling of art infused with a complex and vibrant history as the city has influences from both Muslim and Christian heritages.

Sarma tea-cups. The artistic vibe of the city was amplified by the beautiful wares for sale, many of them imported from nearby Morocco. The most common souvenirs were the colorful farolas, or stained-glass lamps, but the most exciting for me were the Moroccan tea-cups that are used at Sarma, the Mediterranean restaurant I work at in Somerville, MA.

Seville past midnight. Seville shocked me with its energy and thriving nightlife. The bars were crowded with young college-aged students, as well as older people, and were packed close together. You could walk down a single street and encounter packs of more than fifty people each outside each of ten different bars. As we walked home at 3am, the city was lit up and pristine. The crews of street-washers were out on their nightly rounds, and the streets glistened with clean water. At one point, my friend and I crouched down the touch the smooth, mosaic floor of one of the outdoor plazas.

After a period of traveling, my head is filled with images and experiences I could not have imagined before. The Murakami quote about the libraries we keep in our heads continues with, “and to understand the workings of our own heart we have to keep on making new reference cards. We have to dust things off every once in awhile, let in fresh air, change the water in the flower vases. In other words, you’ll live forever in your own private library”. My own private library is now filled with snip-its of Granada and Seville, with Spanish words and Spanish people. It is filled with people I encountered only for 30 minutes, but who told me about the last four years of their life. These things and people and experiences, that I have cataloged and filed away, serve as points of reference to one another, and have reinvigorated my desire to see and learn more—I am really enjoying the letting in of the fresh air into my library.