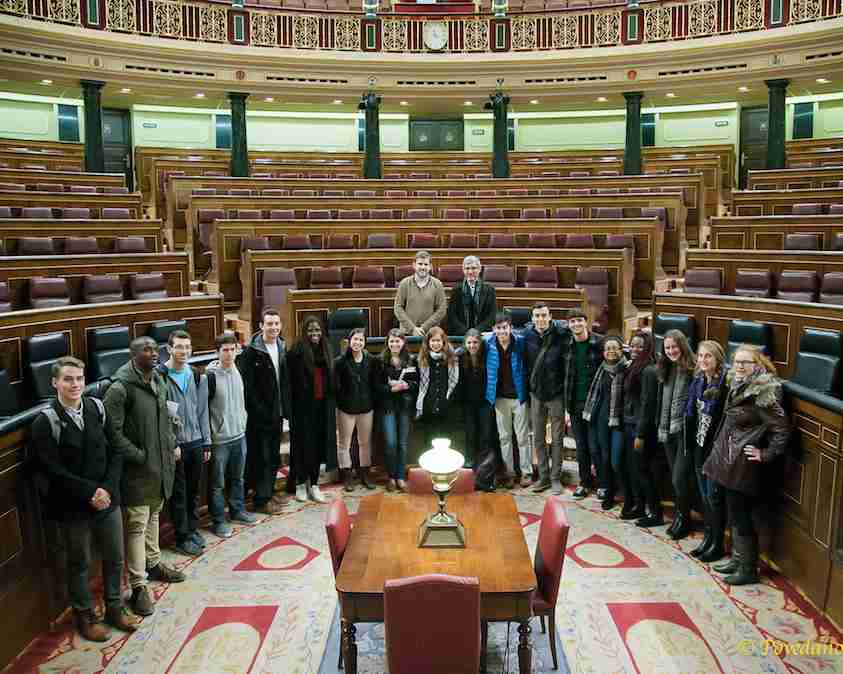 Is Spain Different? Spring 2016 class in the Spanish Congress

RACHEL ALLEN- Long before I came on this program, I had a Skype date with a friend who was on this program last fall. Her name is Kate Mieher, and if you are looking for a fun time, ask her about Tufts Dems or Tufts Drama. Anyway, as we were Skyping I asked her which classes she would recommend to me. Without missing a beat she said, “oh well obviously Is Spain Different?” And I totally understood her praise for it – she’s a political science major! Any poli-sci class would bring joy to Kate. But before I could dismiss her suggestion, she said, “No, seriously, not just because I’m interested in politics, the professor is brilliant, the field trips are once in a lifetime and I’m learning a lot too.” Ever since that conversation, I knew I wanted to be a part of Is Spain Different?. And two months in, I have not been disappointed.
First let me try to describe the professor. His name is Josep Lobera and he’s also a professor at the UAM here in Madrid. One of his greatest qualities is how patient he is with us. The very first day of class I remember him saying that the first couple weeks he would try to speak slower because he knew how out of our comfort zone we were. Once he said that, I immediately felt at ease. Two months in and I’m sure he’s speaking at a normal rate, but I have still felt at ease. Because sometimes when professors speak quickly I shut down and don’t understand anything. Another thing I really like about Professor Lobera is how receptive he is to us. For example, I was working on a group project and I had this big, ideological question about the 4 political party system here. I emailed him the question and he wrote back, “Great question Rachel let’s talk about it on Monday.” And sure enough on Monday he brought up the topic to the class and we talked about it for 15 minutes.
Now, I need to describe the field trips. I unfortunately missed the first one (if you remember I was super sick for a week or so and missed all my classes for that week, sorry profs!) The second field trip was to “el Congreso de los Diputados” aka Congress. For the country of Spain. This is a big deal I’m pretty sure. At first, we were supposed to go to the Congress on Wednesday, but then Professor Lobera had to change it to Monday rather quickly. This was fine with me, but I wondered why we had to change suddenly. On Monday morning we asked why we had to switch and he told us because that Wednesday the elections for president were being held. President for the country of Spain. You know, super casual. We had the unique opportunity of not only going to Congress, but also going within 48 hours of a national presidential election.
First, we talked to a politician who hails from one of the smaller districts in Spain. Smaller districts can potentially have more power as each voter’s vote has more power than in a big city like Madrid with a bunch of residents. We talked to him about topics ranging from the EU to the stability of the four party political system. After this, we took a tour through the Congress building, and it very much looked like the Palacio Real. We ended our tour in the fancy room where the Congressmen debate and such. This was my favorite part of the tour. Because when you looked up at the mural on the ceiling, you could see bullet holes from the “golpe de estado” from 1981 aka 23-F. For those who don’t know, there was a coup d’état in 1981 and the Guardia Civil held the politicians hostage for almost a full day. It was such an eerie feeling being in a powerful room with bullet holes in the ceiling. It connects us to the past, while trying to live in the present and figure out the future.

If anyone is interested in doing the Tufts-Skidmore Spain program in Madrid, I highly recommend this class. My time in this class is only halfway through, but I am experiencing things most people won’t get to experience in their lifetime.