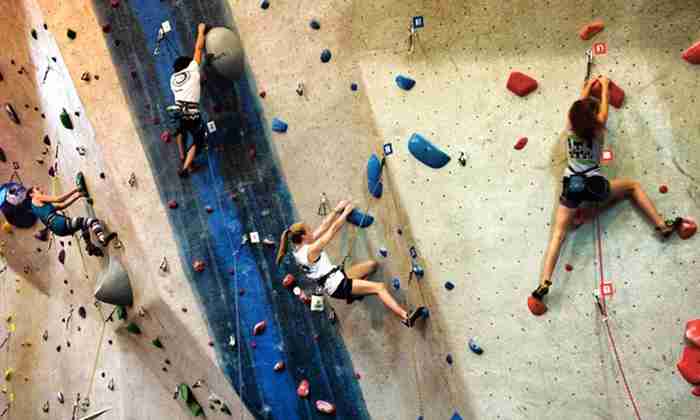 LIZA LEONARD- If you have not heard me talk about rock climbing, we haven’t been hanging out enough lately.

One of the best things that is going on in Spain this semester is my incredible rock climbing class. I know, it seems strange to be excited about an extracurricular activity that I could do anywhere while I am abroad in Europe, but this class has challenged me in a plethora of ways and has served as a benchmark for my growth.

I started out in the class at the beginning of the semester, not knowing much about the sport. At the same time, I wasn’t super confident in my Spanish, my upper body strength, or my social life in Spain. My class is comprised of hard-core rock climbers, mostly men in their thirties and forties and some even older. I am the only American, the only young girl, and the only person that doesn’t have cool rock climbing pants.

The first few weeks I had to learn a lot, and quickly. I was instructed on how to tie the knots and how to belay and how to “top rope”—all in Spanish. Luckily, I enjoyed what I was doing and got the hang of it soon enough. There were moments I felt afraid of falling, moments when I felt utterly weak and defeated, and times when I knew they were talking about “la americana” although I was not sure what they were saying about me. But, in general, I was pumped to be in the class and to finally be trying out a sport I’ve wanted to get into for a long time.

Recently, I have realized that I feel more at ease in the class. I love that everyone knows my name, and that several different people ask me to be my partner. One woman, Christina, always remembers what my weekend plans were and asks me how they went. One of the older members of the class calls me “la niña” and always tells me I am doing a good job. My favorite, though, is my friendship with my partner Oliver. He speaks English as well as Swedish because of traveling he had done in his twenties, and thinks it is awesome that I am learning Spanish. We teach each other words like “tangled” (enredada) and “carabener” (cinta). He loves the intercambio, and says that “the more languages you know, the more open-minded you are.” He is very open, kind, and supportive, and we even have a lot in common. He also loves to run and has run marathons, and tells me about his passion for healthy eating. Like me, he thinks traveling is the best thing ever and spent a few years in Sweden where he worked and joined a bouldering team. It is so cool to be able to make connections to someone in a new culture, and in a new setting—it reminds me that I am equipped to make new friends wherever I go.

Yesterday in class is was hot and sunny and everyone was in a good mood. I felt strong as I did some climbs I know I wouldn’t have been able to do a few months ago. Afterwards, I interviewed Oliver for a class project and everyone was interested in watching me film it. Everyone thinks it is a shame that I am leaving in three weeks, and I agree. I wish I had more time here to stand outside with a bunch of Spanish people, holding some beautiful tangled rope and talking about it in Spanish.