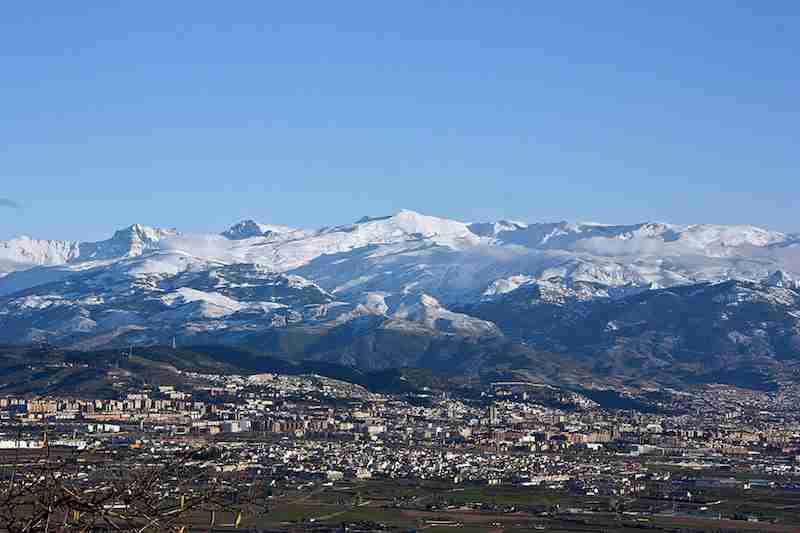 JOANNA DIMAS- Since the beginning of my semester abroad I had wanted to visit Granada, which is located in Andalusia (Southern region of Spain). This past weekend I was able to visit this great city and I absolutely fell in love. I stayed in a small AirBnb by myself (definitely worth it) about 15 minutes away from the Alhambra. The apartment was right in front of Río Darro and a beautiful hiking trail. Being in Granada is exactly what I needed; to be away from a city and be outside with Mother Nature. And I swear, everywhere I went in Granada there was a stunning view of the city and the Sierra Nevada Mountain surrounding the city.
Not only that, but Granada itself had a really chill vibe. I literally saw hipsters everywhere I went. So many young people outside, smoking and just chilling. There were so many restaurants to eat at and many tapas places to relax. There was a ton of street art, modern and traditional architecture on the streets, and so many cool people performing on the streets. I really appreciated the slowed down pace of Granada, it seemed like they really just soaked up everything life has to offer (more than Madrid, I know). And despite not really having a travel plan for my trip in Granada, I feel like I had the best experience. The warm weather certainly helped.
But by far the biggest highlight of my trip was having the opportunity to visit the Alhambra. Although I was not able to see the Palacio Nazaries (because all tickets were sold out), I had the opportunity to see everything else. And let me tell you, the other palaces and Gardens were extraordinary and literally looked like heaven. I have no other way to describe it. All I can simply tell you is that if you have not gone to Granada, you must go. The Alhambra in itself can be an all day event. But on this same day, I also saw the Granada Cathedral and it was also one of my favorite churches. It was so elegant and simple, and it was so nice seeing people in action. There was a choir practicing in a back room and you could hear them, also children learning to play the violin were practicing in the church.
Another really cool thing in Granada was being able to visit Park Federico García Lorca. Although we were not able to see his entire house, we were able to explore the small and peaceful park. It had a very tropical vibe due to the abundance of palm trees and small water beds. Everything about this park was great. And a little girl happened to be there as well, and she seemed to be taking pictures for her first communion.

I think that’s why I really loved Granada. The people and the businesses felt very authentic. It has its own energy, vibe, and community. The people seem so true to who they are and are so calm. Seeing how the people lived really added to the experience. I definitely plan on returning to Granada and seeing the rest of the city and the Alhambra.

Side note: I am running out of toothpaste and was able to buy toothpaste for 1 euro.