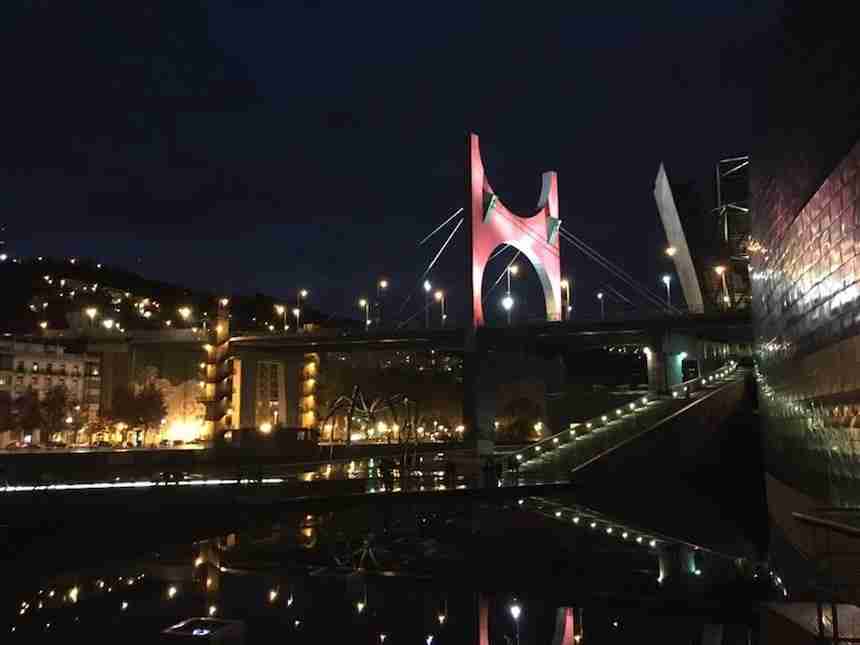 CASSIDY OLSEN- Is there a better way to recover from election anxiety and a long week of school and work than stuffing yourself with chocolate, tapas and Spanish wine? It might not be the healthiest coping mechanism, but it’s worked for me. The first weekend of November, the program took a trip to the north of Spain and explored La Rioja, Spain’s wine country, as well as the cities of Logroño and Bilbao, known for their gastronomía of delicious tapas (or pinchos). Getting up early Friday to leave and returning late Sunday night might have made homework a hassle, but the inconvenience was well worth the 3-day view into a part of Spain that almost felt like another world entirely.
Driving through the mountains as we entered the province of La Rioja on Friday afternoon was made all the more wonderful by the rain and fog that had been looming in the forecast all week. I didn’t quite feel like I was home, but it reminded me of driving through the Catskill mountains with my dad as a kid, or making my way home through New England from Tufts for Thanksgiving. I had been missing the foliage and fall weather I am so accustomed to, so the Spanish north was a nice change from the city landscape of Madrid. After we arrived in Logroño and settled into our hotel, a group of friends and I grabbed some tapas for lunch (tiny chicken burgers!) and explored the city that was decidedly more metropolitan than I was expecting.
As lovely as lunch was, it was nothing in comparison to the program’s main agenda for the day and my favorite part of the whole weekend: a trip to a Rioja winery in Fuenmayor. As a relative wine novice, every part of the tour was totally new to me, from the grape picking to the wine tasting and bottling. We all had a little too much fun trying the grapes and later taking turns drinking directly from a wineskin while gorging ourselves on, you guessed it, more tapas, but I don’t think we embarrassed ourselves too much in front of the nice sommeliers. Also, the complimentary bottle I got to take home will make a great Christmas gift if I can get it through airport security in December.
Saturday was another busy day, filled with more tapas, a visit to the Guggenheim Museum in Bilbao and a boat tour of the river that runs through the city. Despite the rain and the cold, the streets of Bilbao were full of people, from elderly couples to teenage boys playing soccer in metro plazas. The city reminded my friends and I of cities like Amsterdam, Paris and Dublin more than Madrid, referencing the North/South differences in Spain and Western European influence on Basque Country. I was glad for the time to explore such a beautiful place, even on a mournfully gloomy day at a difficult time in the year.

By Sunday, my body could no longer handle more tapas, which was probably for the best: the program had us participate in traditional Basque sports and games that left me embarrassingly sore. The drive home to Madrid left enough time to worry about the election, study for my Prado exam and reflect on the beautiful gloominess of our weekend in the north. The closeness I felt with my friends, mentors and other students in the program after this visit was incomparable to any other collective experience I’ve had thus far in Madrid, and for that I am particularly thankful.