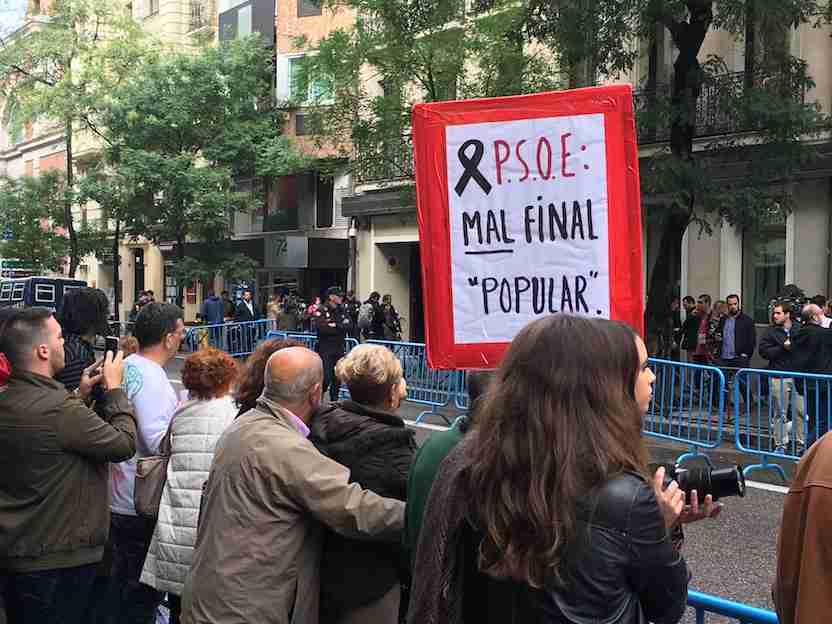 CASSIDY OLSEN- As the U.S. finally drags its heaving body over the finish line of this marathon of a presidential election, it can be hard, as an American, to think of national politics happening elsewhere in the world. We’ve been spectators to this grueling disaster for so long, we can’t look away now! But even while Clinton and Trump spar and tweet and appear to run the 24-hour news cycle, there are major political changes happening in other countries—namely, the very country I’m living in this semester. Spain is in the midst of dealing with an absurdly high unemployment rate, an economic crisis, an influx of refugees and migrants and a convoluted presidential election that has only just appeared to resolve itself. Helping me make sense of the current situation in Spain is the Tufts-Skidmore program class, Is Spain Different? Political and Social Changes since the Transition to Democracy.

Taught by Dr. Josep Lobera, a sociology professor at the Universidad Autónoma de Madrid, Is Spain Different (ISD) explores the ways Spain has changed since the end of the Franco dictatorship in 1975. Although he cements his lessons with sociological methods, Dr. Lobera incorporates history, political science and anthropology in his approach to teaching the material and developing a picture of contemporary Spain. In addition to regular readings, class discussions, presentations and lectures, the course includes site visits to locations around Spain and interviews with professionals in fields that relate directly to Spanish politics.

Although I’m a political science minor at Tufts, I was (surprisingly) poorly versed in the history of Spanish politics and had little knowledge of the current situation before arriving in Madrid. I understood the history of the Franco regime, but had no sense of the radical social changes that have occurred in the country since the 1970s, particularly the decrease in the number of Spanish who actively practice Catholicism. While speaking to my host mother about her life since Franco offers a unique and eye-opening perspective, ISD provides a comprehensive view of a country in a way unlike that of any other class I’ve taken.

The assignments and site visits in ISD are unique to its placement in Madrid and facilitate my learning more than anything else. For a photography project due in November, we’re asked to take photos of anything throughout Spain relating to our curriculum and present a select few with explanations of their significance to Spanish politics. Last Sunday morning, while watching the news at breakfast, I heard that the PSOE (Partido Socialista Obrero Español) vote that would decide how the party would proceed with the presidential election on Christmas (long story) was happening that afternoon. Thinking that the vote would mean plenty of demonstrators outside waiting for results, I headed to the PSOE headquarters to snap a few photos. The PSOE voted to abstain, meaning they will not be participating in the upcoming election and acting president Mariano Rajoy will officially be sworn in. I arrived just after the vote and the crowd was incredibly active, with reporters chasing party officials as they left the building and older women screaming in protest of the decision. I learned more about Spanish politics and society in that hour than I had thought possible.

At this point, halfway through the semester, we’ve had two different site visits: one to the Confederación Sindical de Comisiones Obreras (CCOO), a Spanish workers union, and another to the Conferencia Episcopal Española, a national conference of bishops. Both visits have incorporated lectures from members of the organization and news conference-like interview sessions with questions posed by the students. While the CCOO was interesting, nothing the union members said was as attention-grabbing as the communications director of the Episcopal Conference using the movie “Gladiator” to explain eternal life. The room was pretty skeptical of many things he had to say about the Church’s position in the country today, but it was still an invaluable opportunity to hear from a historically very powerful force in Spain. There are plenty more articles to be read and photos to be taken, but I hope ISD continues to be full of surprises.