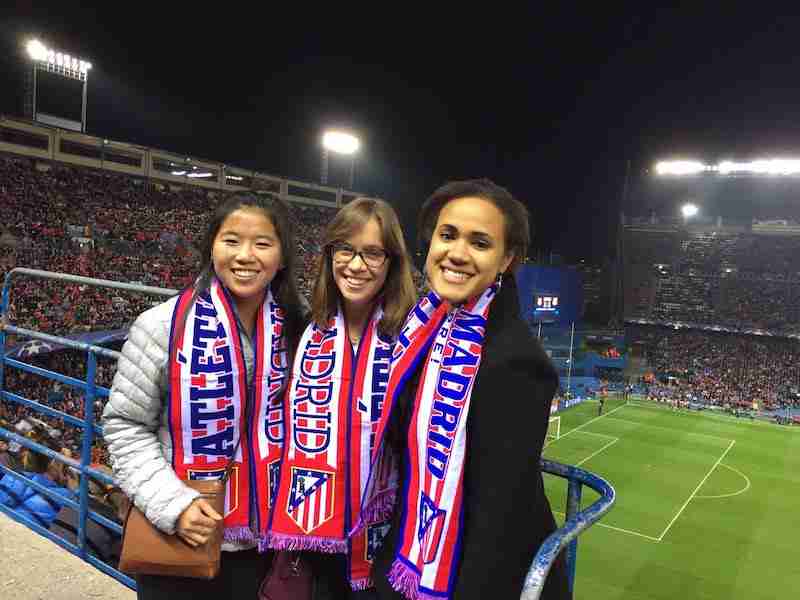 CHRISTINE MAKUWA- I have always been struck by the unifying power that football/soccer has in Europe, Africa and Latin America. Growing up in Zimbabwe surrounded by football fans who supported one team in one league, another team in a different league and five different teams during the World Cup and the Olympics, I’ve always wanted to share in that passion and in that feeling of being part of something bigger than yourself (that you honestly have no impact on). But unfortunately, I never managed to really dedicate myself to the sport aside from getting really into the World Cup and learning the names of almost all the players on the German National Team (FIFA 2014). Thus, I was beyond excited when I found myself weaving through a throng of people dressed in red and white making our way to Vicente Calderón Stadium to watch Club Atlético de Madrid play Russian based FC Rostov in a UEFA Champions League Game.

The first thing that struck me about this experience as a whole, was how easy it was to not get hit by cars as we unknowingly crossed a fairly busy road (because we were just following the crowd blinding), make our way through the crowd of semi-drunk fans, and find our seats. Granted, the only thing I could compare it to was attending a Red Sox-Yankees game – but for some reason it was the calmest entrance into a sports stadium that I could imagine. This tranquil atmosphere quickly transitioned to one of uncontrollable excitement and passion the second the game started. 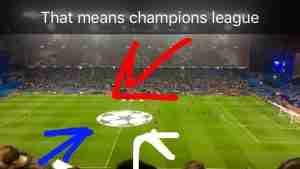 Going to this soccer/football game was certainly one of the most entertaining activities in cultural exploration that I have experienced since coming to Madrid. There’s something so great about seeing people let go of whatever anxieties or preoccupations that’d been bothering them that day and focus entirely on the team and the game, and to put all of their energy into yelling or whistling (my least favourite part of the game – apparently the high pitched whistle is equivalent to booing?) at the ref and crouching forward a foot above their seats in anticipation of a goal. Of course you can’t be in this kind of environment and not find yourself becoming a part of the monstrous mass of people moving and breathing in perfect synchronization. So by Antoine Griezman’s first goal I was completely invested in the game, the team and in the crowd – I leapt from my seat in triumph and joined the rest of the stadium in celebration as I waved my newly bought Atlético Madrid scarf.

At the end of the second half with the score tied 1-1, I scanned the crowd and noticed the sudden appearance of tin foil wrapped bocadillos (baguette sandwiches) in the hands of 90% of the people in the Stadium. It was unbelievable how everyone adhered to this unspoken rule for football games that I simply was not privy to (but I wish I was because I was very hungry by the middle of the second half). The almost tangible harmony amongst everyone in the crowd not only made me think about the powerful effects that soccer/football has on building community and shared experience, but it also forced me to acknowledge the semi-unsettling homogeneity of it all. It raised questions like “how is it possible that this group of over a thousand people can be so in sync” and “do football games like this really bring together a diverse group of people? Or does their exclusivity and breed harmony therefore allowing for this perceived harmony?”

Being a solidly un-athletic and sport-oblivious person I was definitely surprised by how much I learned about football culture in Spain from a 2 hour long excursion. I would definitely recommend that anyone with a remote interest in football/soccer or the Spanish enthusiasm for the sport attend at least one football game while they are in Spain. Whether you’re like me and you’ve seen some televised games and understand the general rules of the game or if you know even less and end up asking “who’s the player in the black jersey,” I can say with much certainty that you will not regret your decision.