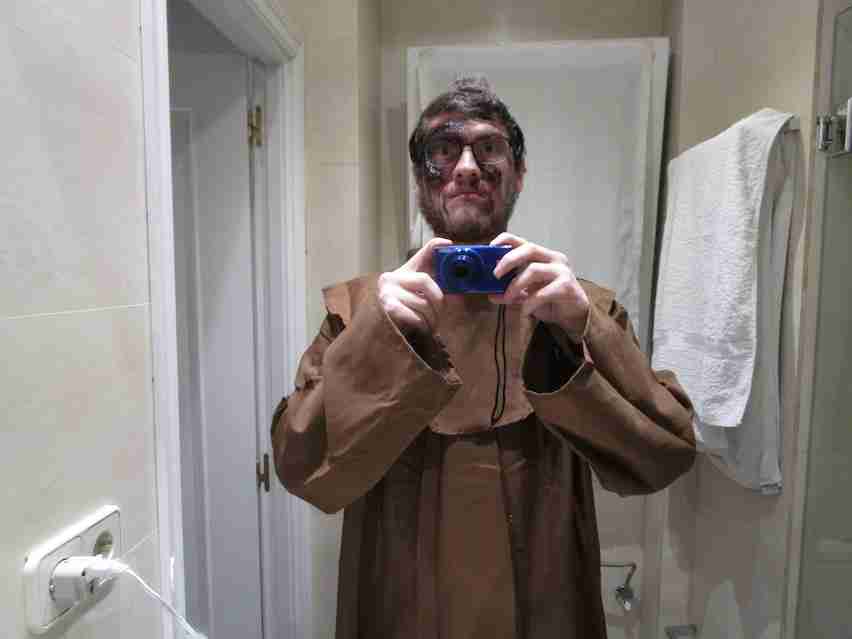 JACOB BARBA-
Boo.
Settle down, I didn’t mean to spook you. It is, at the time of this writing, just after Halloween, and I’ve broken my years-long tradition of doing nothing fun to celebrate the holiday. One of the program staff, Sergio Barreiro, is pretty heavily involved with a Halloween Zombie March, and naturally some of the Tufts-Skidmore Spain students take part every year. It’s held in Alcalá de Henares, a smallish town about an hour away from Madrid. It sounded pretty fun, and I didn’t have any classes the following day because of el Día de Todos los Santos, so of course I signed up. I put it out of my mind until the day of the event, where I learned that we needed to dress up in costume to go on the march. After a slightly panicked two-hour scramble, I found myself waiting in line to get myself decked out in zombie makeup wearing a cheap monk costume.
I wasn’t the only person there. One hundred, one hundred fifty other people also got their makeup, and it all looked pretty great. There was a lot of papier mâché gore, plenty of green and white makeup, and a not insignificant amount of bones or other items sticking out of faces. One of the Tufts-Skidmore Spain students who lives in Alcalá had a zipper attached to her face. I’ve attached a photo of myself after a long night wearing the makeup. Hopefully you can get an idea of what everyone looked like.
The march itself consisted of a few choreographed group moves and a whole lot of improve on the part of the zombies. We shambled up and down one of Alcalá’s main streets, occasionally getting gunned down by soldiers, only to rise up again and shamble further on. Alcalá de Henares is the town of Miguel de Cervantes, so we had a zombified Cervantes giving us commands and occasionally posing for the camera. It was all exciting and the huge crowd loved it. My favorite part of all of this, however, was scaring as many children as possible.
For whatever reason, a bunch of Spanish parents thought that bringing their children to the Zombie March would bring nothing but joy. It did do that, but only to the zombies who made the children scream out of fear. It worked out like this: I make my way to the edge of the horde of zombies. I walk slowly, because a good zombie doesn’t run. I look for a potential victim out of the corner of my eye and, when I’m as close as I can possibly get to them, I let out a scream. Then they let out a scream, and everybody takes pictures. That experience alone made the night worth it.

At the end of the march, we all crowded around a stage in the center of the Plaza de Cervantes and watched a concert. The music was very good and also sung in perfect English, which I found surprising. During the final song, all the zombies sang the lines “Who wants to live forever?” as part of the chorus, after which the event broke up. I highly recommend it for anyone in Alcalá for Halloween.