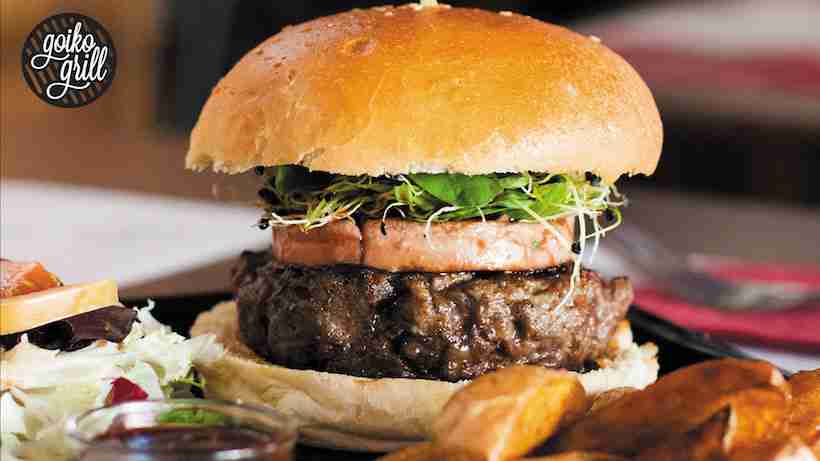 I’ve just got one final though about food. That is, I’ve got one though about food that I’m going to write down. It concerns hamburgers in Spain.
Now, I know what you’re thinking. You’re thinking “Jake, why the hell are you going around eating hamburgers in Spain? That’s probably the most American thing you could possibly do, aside from running down the Castellana wearing an American flag as a cape while you alternate between singing The Star-Spangled Banner and loudly yelling your intention to bring freedom to those godless foreigners.” And normally, you’d be right. However, I feel like you don’t appreciate my situation, Hypothetical Strawman. It’s a long semester, and I can’t be adventurous every day. Also, if you think I’m not allowed to enjoy food that I want to enjoy just because it’s not local, then you obviously don’t eat any Thai food or Italian food, since it’s not local. I could go further with this argument, but I want to talk about this really good burger that I ate, so I won’t.
As Enrique, my Spanish language professor, has explained, there are three types of beef when it comes to Spain. First, there’s regular old cow. With how he talks about it, you’d think it had the taste and texture of an overcooked shoe. After that, there’s veal. Almost every burger I’ve eaten in Spain has been a veal burger. It doesn’t make me feel great before and after eating my food, but I suppose it doesn’t matter whether the dead animal on my plate had a long, fulfilling life or not, as long as it tastes good with ketchup. Finally, there’s ox meat. This is the more expensive and the better thought-of of the three types of beef. I’ve had it once before, and it’s pretty good. I wouldn’t go out of my way to eat it, but it’s pretty good. All this to say, you can probably get a good burger no matter what the cow looked like before it got to your plate. Goiko Grill, the restaurant for which I’m writing this post, advertises their burgers as just cow meat. I have no idea if that is actually true, but I’m just here to enjoy the food, not question it.
Let me paint you a picture of this place. It’s a medium-sized joint, plenty of tables in the back, and a good, clean atmosphere. It wasn’t too crowded when I was there at peak lunchtime, though it’s right on a metro stop. The employees all have earpieces, so you can never be sure whether they’re talking to you or not. I sat, down and ordered my food, and they of course asked how I wanted it cooked. If you ever go to this place, ask for your burger “a punto” or medium rare. It’s the best way to truly taste the meat. The other options are “hecho” for medium and “bien hecho” for well done. I won’t judge you if you choose one of those, but then again, I won’t know that you did it. The burger, when it comes, looks beautiful. Like a picture on a menu.

Every bite tastes like going home to a place where you are loved. I would go back to Goiko grill every week if it weren’t so expensive. Or if the potato wedges were better.