Hold the paella, if you’re looking for your next menú in Madrid, you must try this small, modern Japanese restaurant. Located inconspicuously on the corner of calle Donoso Cortés and calle Hilarión Eslava, Kiyota serves reasonably priced, trendy Japanese food. 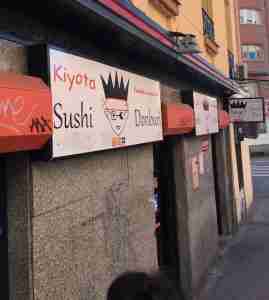 From the outside, Kiyota does not inspire confidence. Graffiti covers the store’s orange awnings above it’s small windows and the restaurant’s many lit up white signs depict a Japanese man winking with a fish on top of his head. Standing outside is a group of young Spanish locals, smoking cigarettes and talking quickly. The decor inside is simple. Upon entering, the kitchen is fully visible behind the waist high counter. The walls are bright orange and there are a few large, framed HD photos of sushi scattered around the room. There are ten, two-person wooden tables, upon which lay pairs of chopsticks, the only utensils available. The restaurant is small.

The restaurant’s size makes it a lively spot to eat. Waiters are constantly bustling about, bringing fresh Bento Boxes from the kitchen to hungry mouths and clearing the tables of satisfied customers. Diners chatter away over large plates of sushi as chefs call out orders from behind the counter. The restaurant openly accepts credit cards and will happily split a check. Wifi is free. 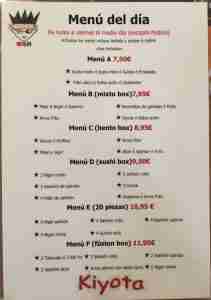 The service is excellent. When I entered the the restaurant, I was greeted and promptly seated. A young Japanese man explained the restaurant’s menú. Although he had little to explain, everything is included. I was hungry, verging on hangry, when I visited, so I made up my mind quickly. The waiter diligently deciphered my broken Spanish order and promptly brought it to the kitchen. The next part I love. My food arrived in under 10 minutes. ¡Dios mío! 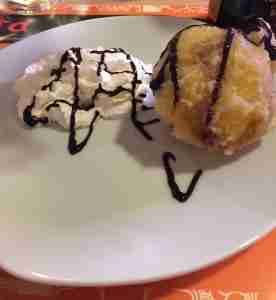 As you would expect, sushi is the main event. But it hardly claims the spotlight. The chefs at Kiyota serve everything from coconut flake crusted fried chicken to Taiwanese inspired Pho noodle soup. I ordered the Menú 2, which included a bottle of Mao for my drink and a Bento Box meal. The neat little box contained two pieces of Nigiri (rice with a strip of fish on top, salmon and cooked shrimp in my case), a large portion of the aforementioned fried chicken, Gyoza, and fried rice. A sweet soy sauce, pickled ginger and wasabi accompanied it. For dessert, Kiyota offers 10 different options as well as coffee and tea. I ordered fried ice cream, an excellent choice. The steaming ball of ice cream and batter was slightly smaller than the size of a certain president’s clenched fist. Que buenísimo almuerzo, and it only cost me €7.90. 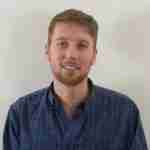 The next time you are in Chamberí, be sure to stop in. The restaurant is open everyday from 12pm-4:30pm and 8pm-12am. If you arrive around 2pm there will be a line, but don’t lose heart. An excellent meal awaits you inside, and it’s a refreshing change from paella and ham.