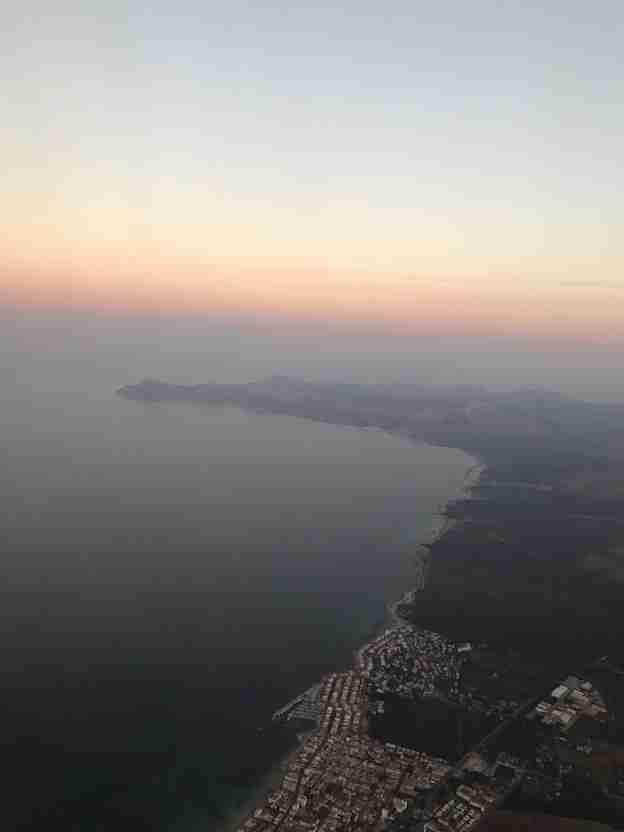 Scene: Monday, 12:15 pm
Tufts-Skid Spain students sit in the Monte Esquinza computer room discussing plans for the puente (long weekend). Someone is playing “Redbone” quietly on a computer in the background. Ryan, Bryan and Kelsey sit hunched over a laptop, realizing all at once that it was silly not to take advantage of a four day weekend.

And that’s how it happened, folks. Something I have come to appreciate about spending time in Europe/Spain is just how easy it is to get places and be spontaneous with planning trips last-minute. In fact, this is the second time this semester that I’ve planned a weekend trip to a Spanish beach three days prior to leaving. As a Boston girl who grew up never more than a 20 minute drive from the beach, the only real complaint I have had with Madrid so far is how far it is from any sort of body of water (especially when the weather is consistently a gorgeous 85 and sunny!). That said, I’ve enjoyed multiple opportunities to adventure to some Spanish coastal cities… I’ve said it once and I’ll said it again: Life here is hard.

First of all, for those of you who have never been to Mallorca, I say GO. I’m probably going to spend the remainder of this article gushing about it, so I apologize, but Mallorca is a beautiful island off the east coast of Spain. It’s the largest of the three Balearic Islands (Mallorca, Ibiza, Menorca) and the flight from Barajas Airport to Palma was generously about an hour. From a logistics standpoint, it was very easy to plan and not an absurd amount of travel. From a personal standpoint, it was one of the coolest, most beautiful places that I have ever visited.

Bryan, Ryan and I arrived to Palma on Thursday evening. Our Airbnb was a twenty minute ride by taxi and we were greeted by our lovely host who showed us around the apartment and the complex’s impressive 4 pools. We settled in and hopped on a bus into the center of Palma to grab dinner and check out the downtown. As we strolled around, it seemed that every alleyway was cute, well-lit and artistic, and every tree or building had somehow been there for centuries. We explored more until we stumbled upon the Catedral de Santa María (stumbled is a poor choice of words here, this Cathedral is absolutely massive and towers over the entire city of Palma). As we climbed up the steps, we found ourselves in an open space that overlooked the ocean and the grandly illuminated Catedral. A cute old man strummed away at a beautiful Spanish guitar tune, and we went silent. The moment felt as though someone was filming a movie about our lives and this was the uplifting beautiful scene about being young adults traveling through Europe. It was glorious.

After a dinner of some Mallorquín tapas, we checked out the local scene at 11:30 on a Thursday night. We ended up in a cute, hole-in-the-wall type bar that had (wait for it) nearly every Nintendo 64 game from our childhoods. We sat there for a few hours and battled each other in Super Smash Bros and Goldeneye (I was quite bad, Bryan and Ryan absolutely kicked my butt). It was an incredibly, yet entirely unexpected, good time.

The following day we made our way to the beach that our host had recommended, called Playa de Es Trenc. The ride to the beach took us through all kinds of scenery, hills, mountains, dry sandy fields, and farmland until we pulled up suddenly to a massive coastline. As we stepped out of the cab and walked toward the water, I felt like I was walking in an ad for one of those family cruise lines, where a couple strolls down a beach with the perfect sun, soft sand, and crystal blue water. Actually, though, the water at Playa de Es Trenc was the bluest water I had ever experienced, and we spent the majority of the day floating around with the schools of fish, goofing off with a GoPro, and napping/reading in the sun. The only hiccup was the way home, in which we had trouble getting a taxi to come get us because we did not speak Catalán (a variation of Spanish that is spoken on the island/in other parts of Eastern Spain), and we ended up playing cards on the side of the road while we waited for a half hour. An adventure nonetheless.

Later that evening, we went back into the downtown for dinner. A friend of ours had recommended a restaurant that was a bit off the beaten path, so we decided to give it a try. If you haven’t been reading and have just been skimming this entire blog post you must pay attention to what I am about to tell you: This was the GREATEST meal I have ever consumed. If you ever are in Mallorca and are deciding ondinner, Toque de queda is the only response I would ever give you. In fact, I’m pretty sure if I could chose my last meal it would be this. (*Quick Shoutout to our server, David, who was so incredibly kind and generous, and whose recommendations did not disappoint) I would attempt to describe what we ate, but I wouldn’t be able to do it a justice. Just know, everything we ate from the Mallorquin meat and cheese, to the fresh seafood, to the roastbeef, to the tinto de verano, to the dessert, were out of this world. At one point, the guys and I looked up at each other and all thought we may shed some tears because of how good the food was. I would qualify it as an all-around spiritually uplifting experience.

So that was our whirlwind trip to Mallorca! If you’re trying to decide which parts of Spain to see, I cannot say enough great things about this beautiful spot of the country; my only regret is we couldn’t stay longer and had to hop back on a flight to Madrid on Saturday morning. To the lovely little island that showed us an exceptionally great time, these three Tufts kids say “muchísimas gracias.”