The first day I had my Spanish Grammar class at the Tufts-Skidmore Spain program center, I noticed this weird thing happening: I was having so much fun, IN CLASS. I consciously remember noting, “wow, I don’t wish I was somewhere else right now.” Is that what being a model student feels like? 😉 This isn’t to say I’m a person who dreads school, because I don’t and definitely do enjoy a lot of aspects of it, but I don’t per sa wake up in the morning telling my roommate how excited I am to go to International Economics. However, in Enrique’s grammar class, I’m constantly laughing and smiling. He is the most animated, entertaining, enjoyable professor I’ve ever had. If Mickey Mouse were a person, I feel like they’d get along great. (I realize that may only make sense to me). 10/10 would recommend getting to know Enrique; he’s a once in a lifetime professor! (I’m not just saying this for extra points on my midterm on Monday). 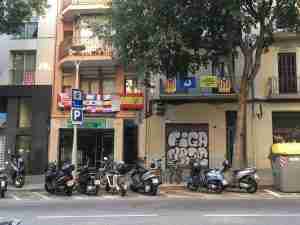 I’m also taking Is Spain Different? at the program center. I had another sudden realization in this class: “wow, I am learning things that truly apply to my daily life and are extremely useful.” (This is sometimes a rare phenomenon in a student’s education). In Is Spain Different?, we discuss Spain’s transition to democracy, how Franco’s dictatorship still affects society today, the political situation between Cataluña and the Spanish government, etc. Every class I learn things that help me better understand Spanish society. Actually, today when I was writing a commentary for Is Spain Different?, I realized I hadn’t gone to google translate in like 5 sentences!! (This is a record for me). My point being, this whole study abroad thing is actually helping my Spanish- woooh!!

I’m also in an economics class, International Trade and Globalization I, at Alcalá University, a Spanish public university. It’s a third year economics class
taught in Spanish, so it’s safe to say I don’t understand between 10 and 75% of what the professor is saying ;). But I truly don’t regret taking this class. As I said in my prior blog post, it’s all about becoming comfortable being uncomfortable. If I’m not struggling a little bit while in a country that doesn’t speak my native language, I’m not putting myself out there. Funny enough, today I was working on a project for this class, and my group realized that we had to entirely redo the project because our data was wrong. (The poor Spanish kid who’s stuck with two non-native speakers, right?). I’m not gonna lie: it was a little frustrating and exhausting in the moment. But, that’s nothing compared to the crazy awesomeness of getting to work in a group of one Spanish student, one French, and one American. Sometimes it’s really difficult to communicate with one another, and it definitely takes 2 times as long to complete our work, but it’s the type of challenge that’s fun and you know will better prepare you for similar situations in the future. (Sorry this blog is so long- I just love school so much!!). 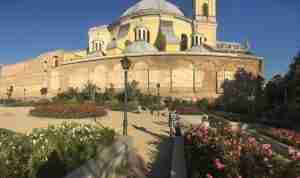 I’m also taking Sketchbook, an art class through the Tufts-Skidmore Spain program where we explore different parts of Madrid and draw. I would first recommend this class because you get better acquainted with the city and go places things you maybe wouldn’t go otherwise. Secondly, you will actually become a better artist (although I feel “artist” is a rather strong word for my level of talent)!! My discovery in this class so far is that even if you stink at drawing (AKA me), shading can transform your drawing from a pitiful one into a mediocre one! Stay tuned, guys-Alex Brodeur and I are competing for the Most Improved Artist Award.

Last but definitely not least, I am taking dance classes at the Centro de Ocio El Horno. It has been such a blast! I’m absolute trash at dance, but that’s okay because there are classes for beginners (so don’t let your skill level deter you)! I attend hiphop classes and funk classes with my gem of a friend Dafni. Our dance instructor has fully capitalized on the fact that she has two English speakers in her class, so she’ll say about one in every eight words in English and then ask “was my pronunciation okay?” Her favorite English phrase is “I’m so proud! I’m so f***king proud of you guys!” Dafni and I love our dance classes so much that we actually practice the choreographies in one of the classrooms at the program center. Sorry, Lisa Peters,
for making you subject to watching us ☺.

So basically what I’m saying is “stay in school, kids. Learning is fun!”

View all posts by Christian Cain →