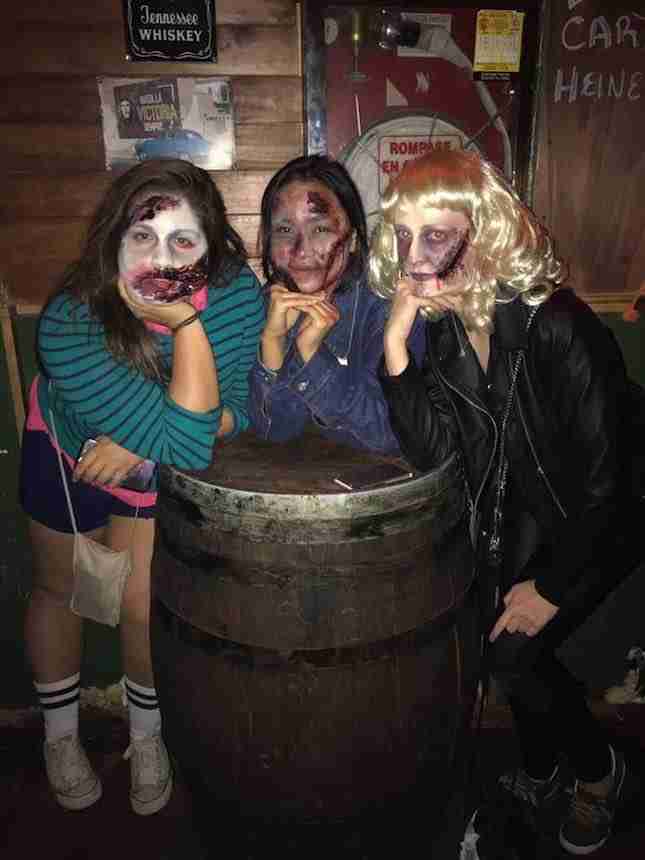 Chatting with my host family earlier this week, I was a little sad to learn that although Halloween has grown in popularity a bit in the last ten years, it’s not really a big thing in Spain. I had assumed that Halloween was very much an American holiday, but the fall-loving New Englander in me was having some FOMO about not being able to celebrate. In España, the day after Halloween, November 1st, is a national holiday to celebrate the dead. Families get together to have a meal, and go to cemeteries to leave flowers and clean gravestones, and nobody has class or work. It’s a somber day about being together and commemorating.

That said, our mentors had invited us to spend Halloween in Alcalá de Henares to participate in the 7th Annual “March of the Zombies.” Knowing little about what this would actually entail, a bunch of us signed up last minute. It was explained that we should dress as movie characters (the theme for the march) and we would get our faces painted like Zombies and take a walk through the streets of Alcalá. Having in the back of my mind that Halloween wasn’t a big deal here, I was picturing a little bit of goofy face paint and a nice stroll through downtown. Boy, was I wrong.

Before I say more, Halloween may not be a big thing in Spain, but Alcalá de Henares knows how to do it right and this was by far the most fun thing I’ve ever done to celebrate. The Madrid-folks met at Atocha to head out around 5. Among us, we had two Sandy’s from Grease, Pulp Fiction, Khaleesi from Game of Thrones, Mr. Robot, and Brian, Justine, and I dressed as Andy, Gene, and Ben from “Wet Hot American Summer” (a movie which, we learned after the fact, literally not a single person in Spain has ever seen). When we arrived in Alcalá, we were led to the basement of a church with lines of chairs and a bustling scene of people. What happened next was not at ALL what I expected: a woman came and sat me down in a chair, among the chaos, and asked if I wanted to be a zombie. I, obviously, said yes and they got to work completely transforming my face. The woman working on me was quite literally a professional makeup artist, and in a crazy haze of paint, tissue, glue, hair dryers, and fake blood I went from “Kelsey-dressed-like-Bradley-Cooper” to something so scary I almost had trouble looking at my own face. The little girls sitting next to me watching the process of making me a zombie looked at me and grimaced. “EW, GROSS” she yelled, as I peered into a mirror of my scary reflection. These make-up artists were the real deal. When I walked out of the room to my friends we were all shocked: we all looked horrifyingly real. (See photo)

The shock didn’t stop there. After we were zombie-fied, we had a rehearsal of what to expect in the march. The parade wasn’t just a stroll through town, as we’d imagined, but an all-out scare fiesta. We learned the specific songs and what corresponded to each number that Sergio would signal to us, and how to pretend to die when zombie hunters “shot us down” in the streets. Contrary to what we’d expected, it was a very coordinated operation. When we got outside, it was an all out party. A band and a circle of drummers jammed as we danced around in the streets of Alcalá. I’m not sure if you’ve ever imagined what a Zombie Dance Party would look like, but the only way I can describe it is a massive group of horrifying looking people dancing around like fools and singing about eating brains. As the march started, it became increasingly obvious how big an event this actually is. Hundreds upon hundred of people lined the streets with cameras to snap photos of the parade. We jumped out at people on the sidewalk, sang merrily, and limped around the streets with our best undead-zombie looks. All the Tufts-Skid kids got super into it, singing at the top of our lungs, and grabbing each other to jump out at groups of kids who were asking for a good spook. We marched for about an hour until we were near the Plaza de Cervantes. The parade paused, and a man in a vampire cape appeared in a third story window to sing a haunting song about the day of the dead. All the zombies were crouched on the ground watching this man sing, and in a moment I’ve had many times since coming to Spain, it felt completely surreal. I couldn’t believe that I was sitting on the ground in an adorable little Spanish city, dressed like a zombie, and singing along with hundreds of people, young and old, as the entire city of Alcalá go together to enjoy Halloween. As the parade ended and merged to a concert in the town center, we decided to go out to dinner with our mentors and go to the local pub to continue the zombie dance party with the rest of the city. Hours later, the Madrid kids got on the night bus to head back into the city, spent but reveling in what we had experienced and how we had spent our non-American Halloween. Alcalá de Henares had taken us in to partake in their own tradition, and we were so grateful.